Stronger than Steel and more Elastic than Rubber

As we enter spring, spiders are becoming a nuisance as they make their silky homes on our patios and porches. However, not all byproducts of spiders are considered a nuisance. Not only does Spider-Man boast the super strength of spider silk, but the textile Kevlar® was developed with properties that compare to the fiber. Now, scientists have uncovered fascinating new facts about this material that offer intriguing possibilities for the future. Learn more about these discoveries and the growing repertoire of spider silk uses:

Scientists and engineers have studied and measured the amazing mechanical properties of spider silk for decades. Spider silks are stronger than steel and more elastic than rubber. They’re tough; they can absorb a large amount of energy without breaking, such as when a bee collides with the web. They’re sticky; some silks are spun with glue droplets along their lengths to keep that bee secure. These studies have led to developments in textiles, notably Kevlar® from the DuPont Company, with properties that mimic some of those of spider silk.

One would think that given all the research that has taken place on the mechanical properties of spider silk that there was little more to discover. But scientists at the University of Akron have recently uncovered a fascinating new fact about this material that offers intriguing possibilities for the future.

Spider silk is a fiber comprising complex protein molecules. Spiders manufacture silk from their spinnerets; organs located on the spider’s abdomen. Depending on the species, spiders can have anything from two to eight spinnerets, usually in pairs.

A single spider can produce several different kinds of silk from different pairs of spinnerets, each with varying properties for specific functions. For example, dragline silk, used for a spider web’s outer frame and spokes, is strong and very tough, but not sticky. Capture silk, used to trap and hold the prey, is sticky and elastic. 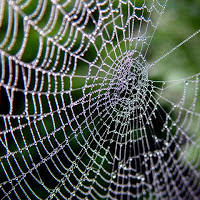 Silk is not exuded under pressure from the spinneret. The spider touches the spinneret to a surface, adhering the silk, and then its own motion away from that surface draws out the silk. This offers the spider even further control over the properties of the silk as the stiffness varies with the rate, and thus the force, of silk withdrawal1.

Recently Dr. Ali Dhinojwala, the H.A. Morton Professor in the Department of Polymer Science at the University of Akron became interested in an observation made by a colleague, Dr. Todd Blackledge who commented on the fact that spider silk contracted and relaxed under varying humidity conditions.

Drs. Dhinojwala and Blackledge began to research this new behavior by hanging weights on lengths of spider silk and exposing the silk to varying humidity conditions2. They found that the silk contracted as humidity decreased and subsequently relaxed as the humidity increased. The contraction was sufficient to lift the weight. Moreover, the contraction of the silk was directly proportional to the humidity and was repeatable and fast – within three seconds of the humidity change. They calculate that the work generated is up to 50 times greater than that of the equivalent mass of human muscle fiber. However, the overall contraction of the silk is very small at around 2.5 per cent of the overall length.

A further limitation is the difficulty of mass production of the silk. Spiders don’t tend to live too peacefully together; they have a habit of eating one other. Thankfully, the same, albeit somewhat weaker, property of contraction is found in silkworm silk where mass production is more feasible.

Using humidity control and biological material as a source of power offers a range of fascinating possibilities in industry and the life sciences. Actuators and valves operating environmental control systems, ligaments and tendons in prostheses, all operated by exposure to wet or dry air.

The more we look, the more we learn about the incredible properties of spider silk and that master materials scientist – the humble spider.