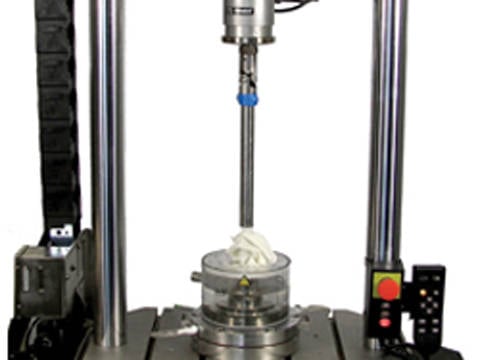 Intervertebral disc replacement is a surgical technique for the treatment of lower back pain related to degenerative disc disease. The advantage of this technique over traditional spinal fusion is that it preserves or restores motion in the spine and has the potential to delay the onset of degeneration of healthy discs at adjacent levels in the spine. Disc prostheses are designed to be load bearing over the physiological range of disc motion and to give years of pain- and trouble-free operation in the body. Understanding the static and dynamic characteristics of a particular device allows manufacturers and designers to ensure their product is proven and accepted.

ASTM F2346 provides a methodology for characterizing the static strength and dynamic fatigue behavior of disc prostheses. The rigorous testing regimes in this standard aim to scientifically validate any prosthesis design.

With a typical test run lasting for 10 million cycles and requiring both axial and torsional loading, it is vital that a testing system copes with these performance demands and delivers the highest quality of results. The requirement to conduct these tests in a wet environment adds to the complexity of the system.

An 8874 axial-torsional system, with the addition of a temperature controller and re-circulator unit, allows device manufacturers and contract research laboratories to conduct both static and cyclic testing on a range of implant designs. The bath, in which saline flow and temperature are controlled, provides a stable environment.

With the use of specialized test fixturing, the 8874 system&'s combined axial-torsional actuator allows for characterization to be conducted in axial compression, compression-shear, and compression-torsion test modes for both articulating discs of traditional metal-on-metal, or metal-on-polyethylene design. It's also used for the next generation of prostheses, which feature an elastomeric component to give axial compliance under load that mimic the biomechanics of the natural disc. The challenges of developing testing equipment and fixtures that allow for unconstrained six degrees of freedom of motion and satisfy demanding ASTM requirements have been overcome by the 8874 installation at Ranier Technology Limited, Cambridge, UK. It is used for both performance and fatigue characterization of their elastomeric lumbar disc prosthesis – CAdisc-L.

We recommend that you review the standard to fully understand its requirements.