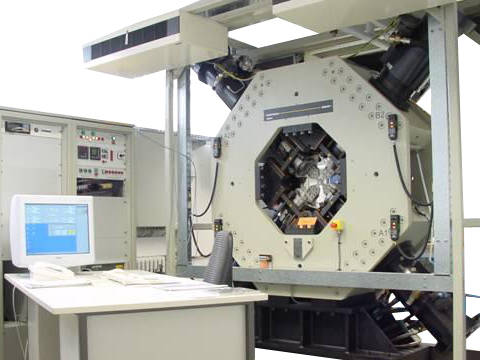 Most engineering structures are influenced by complex multiaxial stresses that arise from loading, geometry and/or material inhomogeneity. However, laboratory testing predominantly uses different kinds of loading regimes, which include creep, quasi-static and fatigue tests – simple specimens that are subjected to uniaxial states of stress. Because of the contrast between design-based uniaxial test data and the functional operation of components with multiaxial stresses, more research work is being conducted to ensure that the relationship between the two is adequately understood.

Equal deformation of each end of the test specimen causes no movement of the center position; displacement of each actuator in the same direction moves the center position without altering the deformation. Each loop operates independently and there is no interaction between the in-phase and out-of-phase drive signals to the actuators. This principle, as described for two opposed actuators, is also applicable to a cruciform test set up with four actuators. Tests can also be run in strain and load control modes. A recently installed cruciform system is designed for complex TMF tests - where measured total strain signals must be corrected in real-time with respect to thermal expansion and elastic strain content

Our cruciform systems, with 100 kN or 250 kN capacities, provide a highly aligned and stiffened load frame, together with hi-fidelity seal-less, hydrostatic bearing actuators that provide superior control of the specimen test.  This loading system is well matched to the 8800 Series Digital Controller, and our new WaveMatrix™ dynamic testing software that provides an intuitive user interface for complex, multi-axis tests.

WaveMatrix™ is intelligent software designed for fatigue and dynamic testing of materials and components. It delivers flexibility - run everything from a simple static ramp, to cyclic waveforms through to complex multi-step, multi-axial tests The highly visual environment with integrated tabular screens, clear menu structures, time-based matrix test preview and configurable live test workspace is designed to be intuitive and instill confidence. Packed with intelligent features, such as data reduction and built-in project organization, designed to simplify your testing.