What is Modulus of Elasticity?

Modulus of Elasticity, also known as Elastic Modulus or simply Modulus, is the measurement of a material's elasticity. Elastic modulus quantifies a material's resistance to non-permanent, or elastic, deformation. When under stress, materials will first exhibit elastic properties: the stress causes them to deform, but the material will return to its previous state after the stress is removed. After passing through the elastic region and through their yield point, materials enter a plastic region, where they exhibit permanent deformation even after the tensile stress is removed.

Modulus is defined as being the slope of the straight-line portion of a stress (σ) strain (ε) curve. Focusing on the elastic region, if the slope is taken between two stress-strain points, the modulus is the change in stress divided by the change in strain. Modulus =(σ2 - σ1) / (ε2 - ε1) where stress (σ) is force divided by the specimen's cross-sectional area and strain (ε) is the change in length of the material divided by the material's original gauge length. Since both stress and strain are normalized measurements, modulus is a consistent material property that can be compared between specimens of different sizes. A large steel specimen will have the same modulus as a small steel specimen, although the large specimen will require a higher maximum force to deform the material. Brittle materials such as metals, plastics, and composites will exhibit a steeper slope and higher modulus value than ductile materials such as rubber. 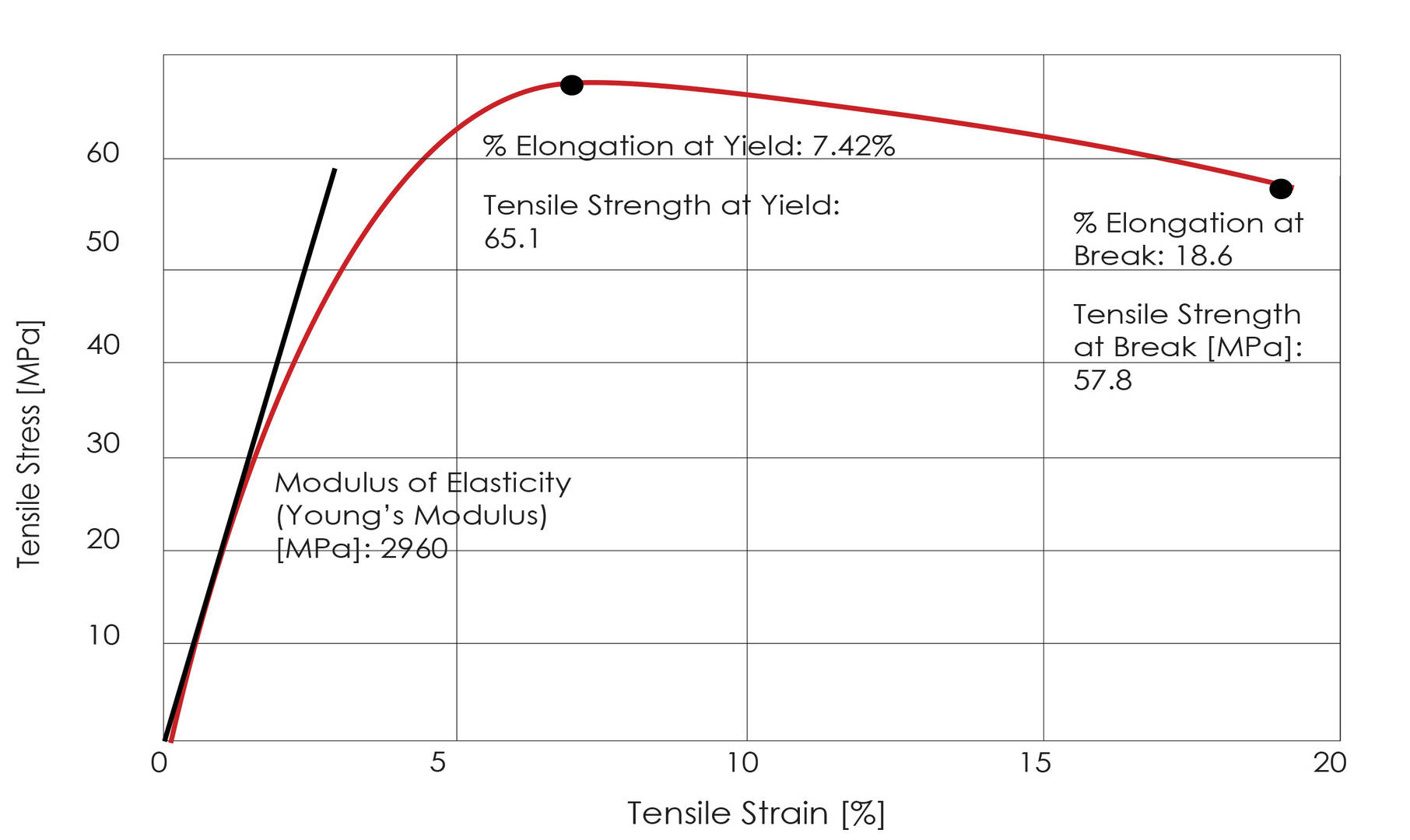 Unlike brittle materials like plastics and metals, elastomeric materials do not exhibit a yield point and continue to deform elastically until break. In this case, modulus is simply reported as a measure of the force at a given elongation. For example, in the graph below, modulus is reported as stress at 100, 200, and 300% strain. 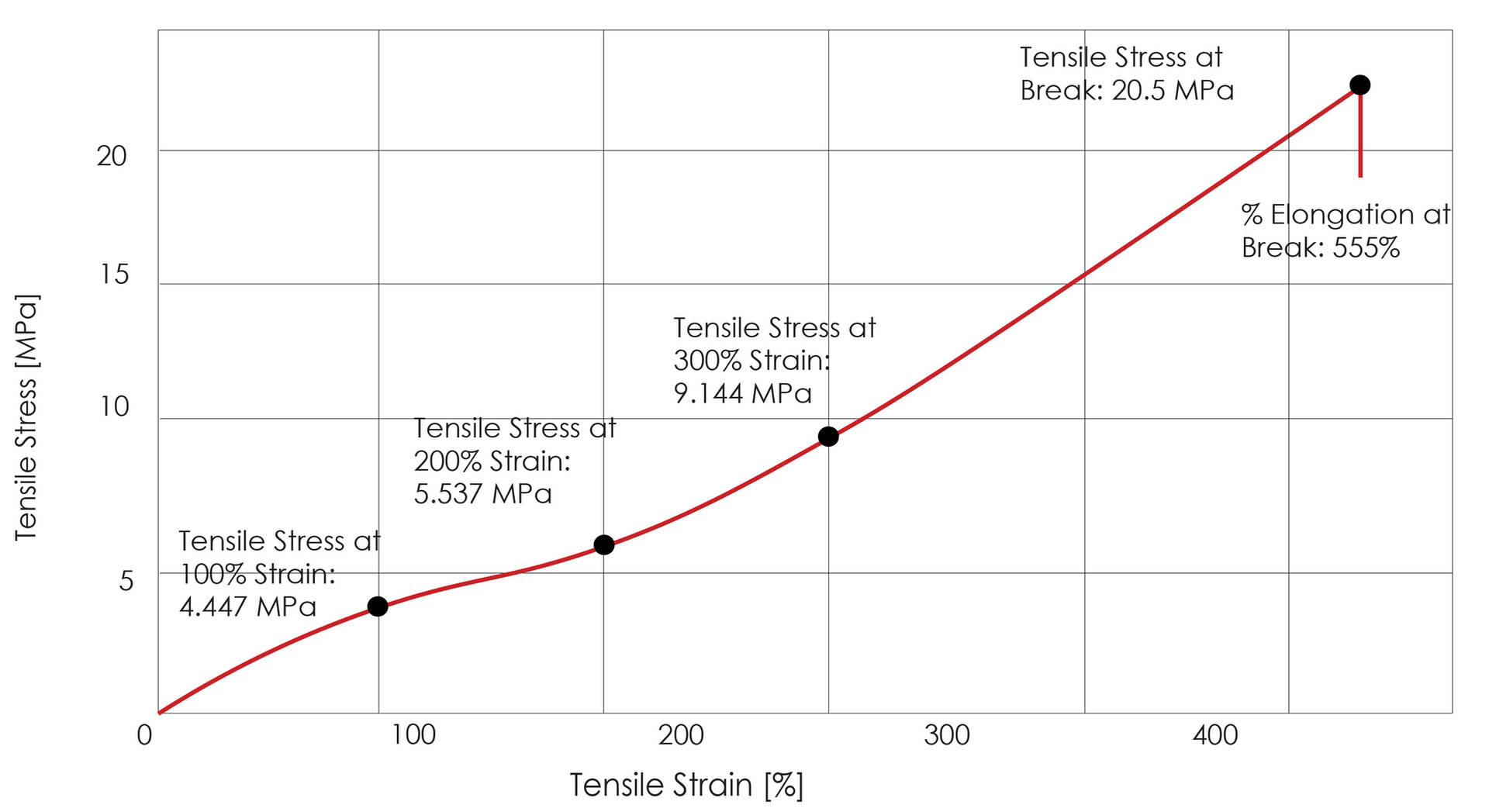 Users recording modulus should be aware that there are many different ways to calculate the slope of the initial linear portion of a stress/strain curve. For example, Instron's Bluehill® Universal software offers more than eight different ways to calculate modulus of elasticity. When comparing modulus results for a given material between different laboratories, it is critical to know which type of modulus calculation was chosen.

Slopes are calculated on the initial linear portion of the curve using least-squares fit on test data. The steepest slope is reported as the modulus.

A user selects a start strain point and an end strain point. A line is drawn between the two points and the slope of that line is recorded as the modulus.

A user selects a start strain point and an end strain point. Using the least-squares fit on all points between the start and end points, a line is constructed. The slope of the best fit line is reported as the modulus.

A user selects a tangent point on the stress/strain curve. The slope of the tangent line is reported as the modulus.

Elastic modulus is determined by using a standard linear regression technique. The portion of the curve to be used for the calculation is chosen automatically and excludes the initial and final portions of the elastic deformation where the stress-strain curve is non-linear.

Modulus is determined by a hysteresis loop generated by a loading and reloading section.