Bamboo is a natural composite material comprising cellulose fibers embedded in a lignin matrix. The cellulose fibers are aligned along the length of the bamboo providing maximum tensile strength and rigidity in that direction. Moreover, the fibers are most abundant on the outermost part of the bamboo stem while the inner part of the stem is hollow, meaning that bamboo is strong, stiff, and light.

These outstanding properties of bamboo have been used for centuries for many purposes; bamboo buildings, bridges, furniture, and more. But there is one piece of equipment for which stronger, stiffer, and lighter are the ultimate watchwords – the bicycle. 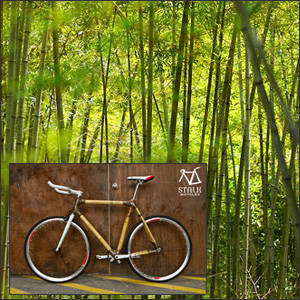 Bamboo is an ideal material for bike frame construction where stiffness and strength to weight ratios are important. It is light; bamboo stems, known as culms, are hollow. It is stiff; the strong fibers are distributed most densely in the outer surface, the area of greatest longitudinal stress. It is strong; some bamboo fibers can have tensile strengths of up to 40 kN/cm2. Solid transverse nodes divide bamboo culms into segments. Each segment acts as a short strong column, resisting buckling. The nodes also act as crack arresters.

The composite nature of bamboo gives it one more major advantage over steel, aluminum, and carbon fiber. Bamboo frames are excellent for absorbing road shocks and vibrations, as well as their resistance to crash damage. The vibration damping is a performance advantage on longer rides, reducing fatigue and shock associated with carbon frames. The rider experiences a rare combination - a performance frame that absorbs road shock yet remains stiff.

The first bamboo bicycles were shown at the London Stanley Show of 1894. In fact, an English patent was granted that year on the use of bamboo as a bicycle frame. However, it was not until the late 1990s that more extensive interest in bamboo bicycle production took off.

Much of the renewed interest in bamboo for use in bicycles is due to the increased emphasis in environmentalism and sustainability in engineering and design. Bamboo is one of the fastest growing plants in the world; therefore, it is a natural and highly renewable resource. Some species have been recorded as growing up to 100 cm (39 in) in a day.

The individual bamboo sections are selectively chosen for each part of the frame. Different manufacturers use different processes, but in general, the culms of bamboo are heat treated and smoked to prevent cracking. They are coated to protect them from moisture. Some companies join the frame components to one another using hemp wrapping in an epoxy matrix; others use carbon fiber jointing.

Despite the resurgence of interest in bamboo as a material for bike manufacture, the industry must be considered as still in its infancy. The bikes are labor intensive and thus costly to make, although rising prices for steel and aluminum are reducing the differential. To become more than a niche product, the industry must achieve a wider recognition of the enhanced performance attributes. However, the growing number of bamboo bike builders entering the market shows promise in the industry’s future.