As part of the simplification process of Bluehill Software, the team also devised ways to quickly make modifications to the workflow that fall right in line with the touch experience. Something simple, like modifying the data presented in the live data display, users can just tap the data channel and quickly edit the units or number of digits. Another new feature is QuickTest. QuickTest runs a very simple test to break, capturing just a few basic results. The test can be set up on one screen and can be completed in two taps.

I’m very excited this product is now getting in the hands of our customers, and we can share what we’ve been working on over the past couple years. We’ve greatly elaborated on the traditional Bluehill Software architecture and added a modern and user-friendly touch interface, using the latest software technology. In doing this, we’ve made Bluehill Universal more powerful, with new features such as Instron Connect, QuickTest, and a completely overhauled data and results exporting feature. Like Bluehill 3, these new features will set the groundwork for many additional progressive features in the years to come.
Bluehill® Universal, Instron’s latest static testing software, was built from the ground-up for touch interaction with large touchpoints and intuitive gestures to make the user experience simpler and smarter. The progressive outcome of Bluehill Software took a consolidated effort from Instron experts, bringing together unrivaled experience and cutting-edge research.

The Bluehill Universal user experience has been designed by a collaboration of members from different software teams across the world, each team representing various software products offered by Instron. This consortium has worked closely together to create a Bluehill application style that can be translated across all of Instron’s software products. Personally, I serve as senior software engineer for the team based out of our corporate headquarters. You may have seen our CEAST HV Software package, which looks and feels like Bluehill Universal. Being a part of the global consortium, during that development, I represented Bluehill Universal and worked closely with the HV Software development team to implement our new style and design in a consistent manner.


Touch technology has been around for several decades, but has really moved mainstream over the past 10 years. With the introduction of smartphones, touchscreens have become a part of the daily lives of millions of people. Before that, you may have used a touchscreen at an ATM or at a kiosk of some sort, albeit infrequently. Touch is no longer a nice-to-have feature, but an expectation among software users. Children are now learning to interact with computers via touch before they may learn to use a traditional mouse and keyboard. Therefore, the team understood this as a requirement to provide modern materials testing software. 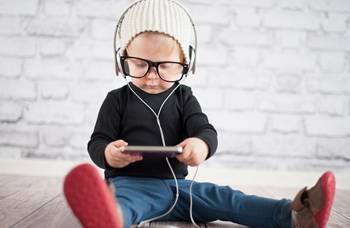 Touch users expect the touch experience to be similar to what they have learned by using their smartphones. This expectation encompasses many aspects of the experience, from the hardware of the screen to the software itself. Users expect to be able to simply tap objects on the user interface (UI) to invoke certain actions, along with other gestures that they have learned from using their smartphones. With this in mind, Research & Development went through many revisions of the software and the touchscreen itself to ensure the best user experience.

“Touchable” and “touch-friendly” are two terms that we’ve used to describe the user experience of a software application when interacting with it via touchscreen. From a software standpoint, there’s no difference between a mouse “click” and a “tap”. So, almost any software application can be considered touchable. However, just because it’s touchable doesn’t mean it’s optimized for touch. Many of us have experienced this with our smartphones, where you open a website or an app, and you can’t quite tap something or you try to use a gesture and it doesn’t work. This is where touch-friendly comes into play—where the user experience is enhanced by using touch to interact with the application. 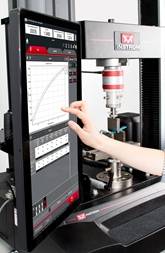 From a software standpoint, this means making items bigger and implementing gestures; sounds easy! What we’ve done to support the increased sizes for our inputs is to take a step back and try to simplify our workflows and use the available space on the screen in a smarter way. So whether you like to run an application in a portrait or landscape orientation, the Bluehill Universal interface will rearrange itself to use all the available space on the screen. In addition, we’ve implemented gestures, including the options to pinch to zoom on a graph or flick to scroll a menu. Menus can be accessed through what we call a “hamburger”. The hamburger menu allows users to access items, which were less obvious on earlier software versions. To improve the touch experience, we’ve also put these hamburger menus throughout the software to allow users the option to simply click the button to display the menu. These steps, and several others, have made Bluehill Universal a touch-friendly software application.