What is a Creep Test?

A creep test, sometimes referred to as a stress-relaxation test, is used to determine the amount of deformation a material experiences over time while under a continuous tensile or compressive load at a constant temperature. Creep tests are fundamental for materials that are needed to withstand certain operation temperatures under load. For materials such as metals or alloys, their material properties change significantly at higher or lower temperatures. By examining the results from a creep test, engineers can determine a material's expected deformation and avoid failure when designing new systems for different environmental conditions. Creep tests are commonly performed on the following components and materials:

How to Perform a Creep Test?

To determine creep properties, a material is subjected to prolonged constant tension or compression loading at constant elevated temperature. While testing, the material's deformation is recorded at specific time intervals and overall data is plotted on a creep vs time diagram. The slope at any point on this curve is known as the creep rate, in which units are expressed in terms of in/in/hr or percent(%) elongation/hr. Maintaining a constant temperature during a creep test is critical due to the possible thermal expansion or shrinkage of the material.

Specimens pass through three different stages during a creep test. The first stage is primary creep, where the creep rate begins by rising quickly and then slows down and decreases. The secondary stage is where the creep rate remains fairly uniform. During the tertiary stage, when the specimen is expected to reach its breaking point, the creep rate is much steeper than it is in the secondary stage, culminating in specimen failure. If failure occurs, the time for rupture is recorded. If a specimen does not fracture within the creep test period, creep recovery may be measured.

Some examples of standards that require creep testing are ASTM E139, ASTM D2290, ASTM D2291, and ASTM D2294. For more details on testing procedures, please refer to these standards.

How to Determine Stress-Relaxation?

To determine the stress-relaxation of a material, the specimen is deformed a given amount and decrease in stress is recorded over prolonged period of exposure at constant elevated temperature. The stress-relaxation rate is the slope of the curve at any point. 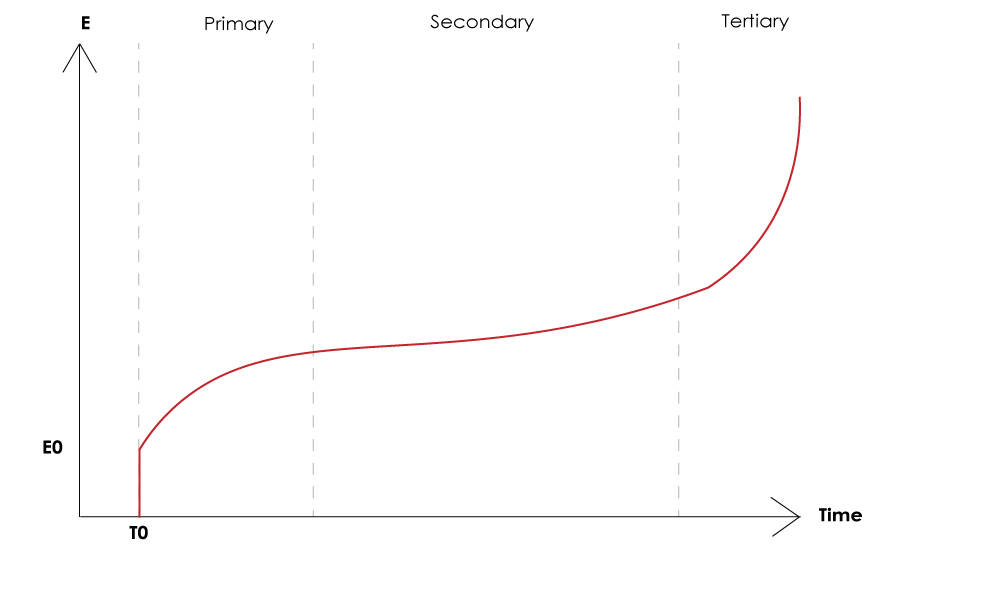