In Vitro Microindentation of Bone to Determine Mechanical Properties 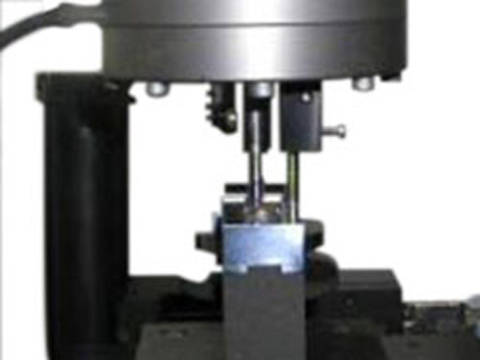 Microindentation testing allows for the measurement of mechanical properties of bone and other hard tissues, and it is vital for estimating the stresses and strains exerted at the cellular level that are caused by loadings experienced on a macro-scale. Microindentation testing helps researchers understand the intrinsic properties of bone that cannot be measured in experiments using larger bone specimens.

The objective of this particular microindentation test is to determine loading and unloading modulus during the indent. For a successful test, it is imperative to measure indentation depth relative to the surface of the specimen of bone, as well as accurately measure the force applied during the indent.

The microindentation head can be removed from the system to leave a test machine that is capable of other tensile, compression, or flexure tests. In the case of ElectroPuls, it can perform fatigue tests on a variety of biomaterials or medical devices.

ElectroPuls instruments are state-of-the-art electrodynamic test systems for dynamic and static tests on materials & components. Powered entirely from a single-phase mains supply, they feature the latest in testing technology and a host of other user-oriented features.