Creation of a New Generation of Testing Instruments: Part 2

Last week, we introduced a little bit of history into our blog by discussing the need to develop a testing instrument that could accurately test the new thermoplastic material of parachutes back in the 1940's .... Below, we finish the conversation by talking about the technology developed more than 50 years ago. Missed Part 1? Read it here ...

These goals were accomplished with technology that was new at that time and primarily developed to meet other application needs. The strain gage initially invented at Caltech in 1936 was also, independently, developed at MIT in 1938. Its intended use was in the field of stress analysis and originally thought not precise enough to be used for accurate force measurement. The two research engineers working on the test machine project disproved that conjecture and developed a number of load cells with a broad range of capacities that could be used interchangeably in the test machine to achieve the necessary broad force measuring range. Another key technology was the invention of the amplidyne power drive system at GE around 1940. Its primary application was in the control of gun turrets on Navy ships. In the testing machine it enabled precise control of position of the crosshead and subsequently, constant rates of crosshead motion independent of the force being applied to the specimen. This, in combination with manually set change gears, enabled a speed range of 1000 to 1.

Finally, a chart recorder was synchronized to the crosshead position giving a measure of specimen elongation for materials of low compliance compared to the testing machine components.

All these systems used together created a new generation of material testing machines that could meet the needs of many of the new materials that would follow the introduction of nylon. When the war ended, Harold Hindman and George Burr commercialized the instrument they had developed and founded Instron Corporation in 1946. They always claimed that they grew their business “one application at a time”. 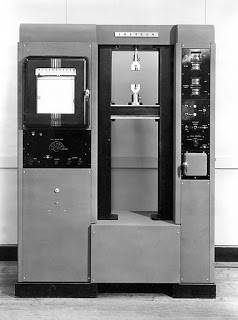 Do you find yourself faced with new testing challenges like Hindman and Burr? Leave us a comment on what you're testing.