In one of our previous posts, we blogged about plastic strain ratio, r. Besides r-value, another parameter that is commonly measured in metals testing is the n-value. So what is n-value?

n-value, also known as the strain hardening exponent, is the measure of a metal’s response to cold working. Cold working is the plastic deformation of metal below its recrystallization temperature and this is used in many manufacturing processes, such as wire drawing, forging and rolling. As a ductile metal is plastically deformed during cold working, it becomes harder and stronger while its ductility decreases. The strain hardening exponent gives us an indication of how much the metal hardens or becomes stronger as it is plastically deformed.

It has been found that the relationship between true stress and true strain of a material during cold working can be represented by the equation:

where σ and ϵ represent true stress and true strain respectively and can be calculated using the equations below. The constant K is called the strength coefficient and varies from alloy to alloy.

The strain hardening exponent n can thus be determined from the slope of the logarithmic form of the true stress versus true strain curve within the plastic region.

A metal with large strain hardening exponent n responds well to cold working. The figure below illustrates the true stress versus true strain curve (in logarithmic scale) for metals with large and small n-values. You can see that for a given amount of strain, a metal with a larger n-value obtains a greater degree of strain hardening. 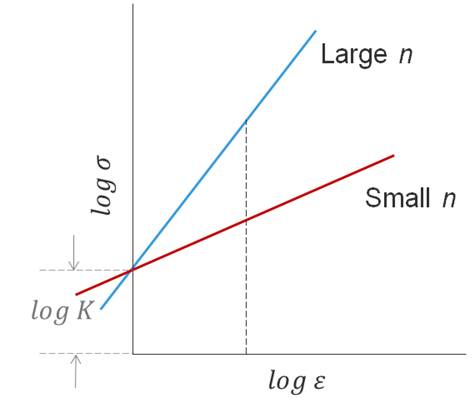 To measure engineering strain e for determination of n-value, we only need an axial extensometer. However, it is worth noting that even though n-value and r-value are two distinct parameters, the test for measuring them is usually conducted at the same time. This has led to the two tests being commonly referred to collectively as “r and n” testing. So although a transverse extensometer is not needed to measure n-value, most people will have it anyway because they are also measuring r-value at the same time.

To learn more about n-value, check out ASTM E646.