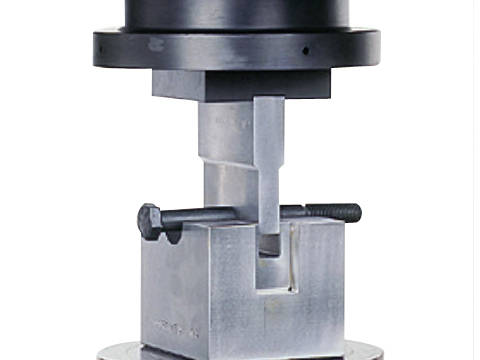 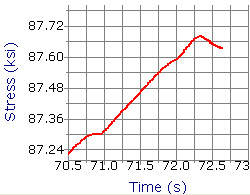 The Aerospace Industries Association publishes NASM 1312-13, Fastener Test Methods for Double Shear Tests. This standard is focused on the details surrounding double shear testing of fasteners. It also replaced MIL-STD-1312-13A. The test described in this standard can be difficult because the test rate is specified in terms of stress and load, but the rate needs to remain constant throughout the entire test. In addition, total failure of the fastener is undesirable, so break detection and stopping machine movement is critical.

For this test we used an Industrial Series 300DX Model machine outfitted with Bluehill® Software, a double shear fixture and a high resolution position encoder. We performed the test in compression and applied a shear load perpendicluar to the axis of the fastener. The convenient compression space of the 300DX machine allowed us to easily center the double shear fixture and fastener. The fast data sampling rate of the Instron electronics provided accurate control during loading. In order to achieve a steady test rate during yielding, we configured the software to automatically change from stress to position control at the same relative rate just prior to yielding. This prevented acceleration from occurring at the onset of yielding. We used a high resolution encoder because of the very small travel requirement of the shear test. Finally, accurate control was necessary to prevent total failure of the fastener. This could result in damage to the fixture as well as a potentially hazardous situation for the operator due to the possibility of a high energy fracture of the fastener.

This solution proved to be very effective for the the NASM 1312-13 double shear test. The break detection criteria was set at a very sensitive level and allowed shear to occur without total failure of the fastener. Bluehill software automatically generated the required Shear Strength and Peak Load values at the end of the test.