How to Perform an ASTM F88 Peel Test on Medical Packaging

In the medical device and packaging industries, sterilization is a big concern. Whether a device is disposable or intended to be re-sterilized and re-used, all medical packaging must have seals strong enough to protect the sterility of the product while also being easy for healthcare providers to open. In order to ensure that packaging achieves this delicate balance, many manufacturers follow testing standards such as ASTM F88 to measure the tensile strength of the adhesives used in medical device packaging. This guide is designed to introduce you to the basic elements of an ASTM F88 peel test and will provide an overview of the equipment, software, and samples needed. However, anyone planning to conduct ASTM F88 testing should not consider this guide an adequate substitute for reading and following the full standard.

ASTM F88 is conducted on a universal testing machine (also called a tensile testing machine) at a rate between 200 and 300 mm/min (8 to 12 in/min). The standard calls for the calculation of two measurements: 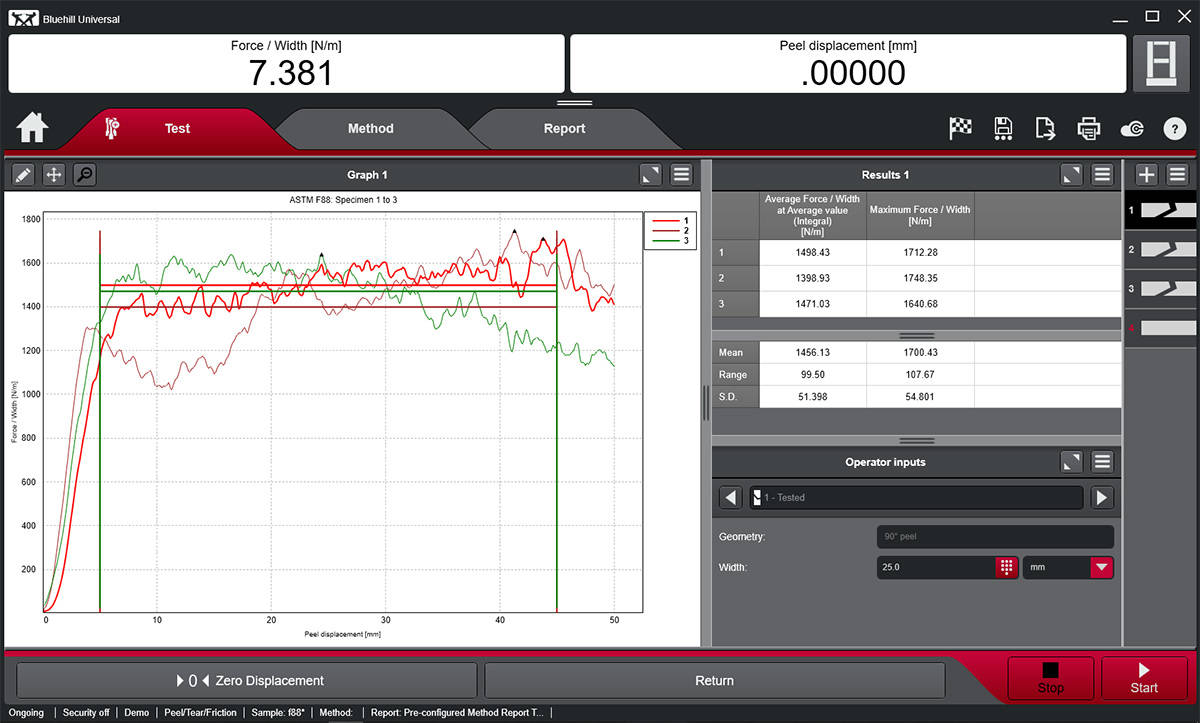 Both the 3400 and 6800 Series testing machines can be purchased with Instron's Bluehill® Universal Software and Operator Dashboard. The Adhesives and Biomedical packages within Bluehill Universal come with pre-loaded test methods for many standards, including ASTM F88. For customers who need to meet 21 CFR Part 11 compliance, Bluehill Universal's Traceability Module allows full visibility into all test system activity and allows users to prove it during an audit. 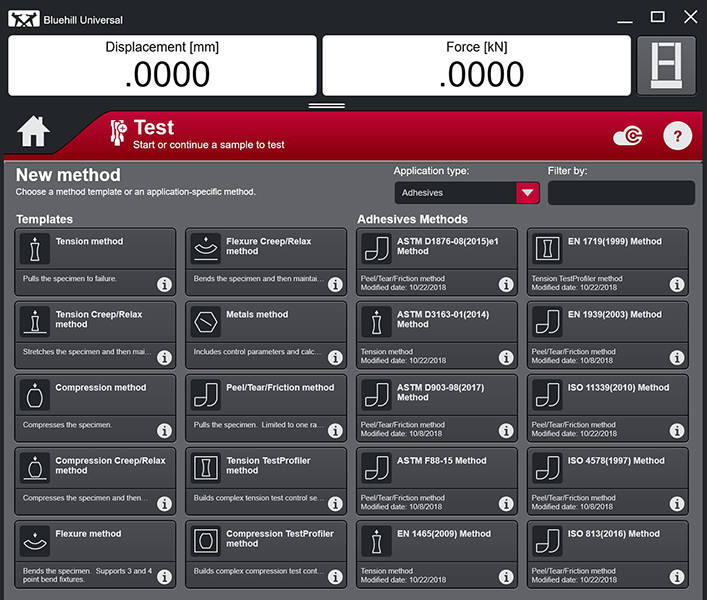 Of the two testing configurations (T-Peel or 180° peel), there are three specimen holding methods: two for T-Peel and one for 180° peel. Each specimen is self-adhered to an alignment plate and then secured in an upper and lower grip for testing.

T-Peel "Technique A" - This configuration is a standard T-peel application where the adhered section is left unsupported while the specimen is under test.

T-Peel "Technique B" - This configuration is similar to Technique A; however, the adhered part of the specimen is supported by hand.

180° Peel "Technique C" - Technique C involves adhering one side of the specimen to a substrate or alignment plate for a 180° peel test. The side with the plate is inserted in the upper grip, while the other end of the specimen is secured in the bottom grip.

To ensure conformance with the standard, all specimens which need to be cut for testing shall be done so in accordance with ASTM D882, which is the testing standard for tensile strength and elongation of thin film. Specimens must be cut to a width of 25mm (0.984 in), 15mm (.5971 in), or 25.4mm (1.0 in).

There are two gripping solutions for this standard, depending on needs for ease of use, throughput, and the ability to offset alignment for 180° peel tests. In both cases, rubber-coated grip faces should be used so as to avoid tearing the delicate specimen. Jaw faces are available in many different sizes and are easily interchangeable.

Advanced screw side action grips provide a standard solution for each configuration outlined in ASTM F88. They are easily opened and closed with the use of screws on each side of the grip. In the case of 180° peel applications, either the upper or lower grip faces can be offset to account for the thickness of the substrate, or alignment plate.

Pneumatic side action grips provide an advanced solution for T-Peel specimens and improve throughput with the use of a pneumatic footswitch.

Both options can be fitted with specimen centering devices to ensure proper alignment for each test. 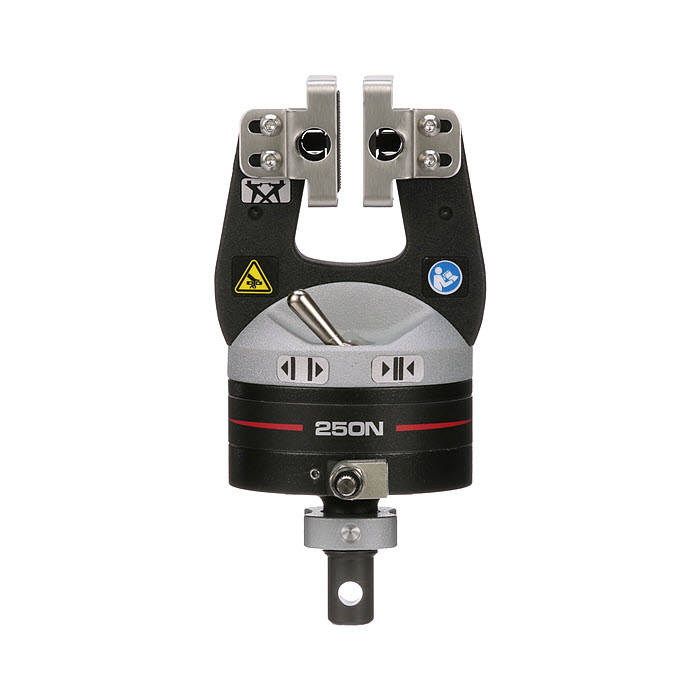 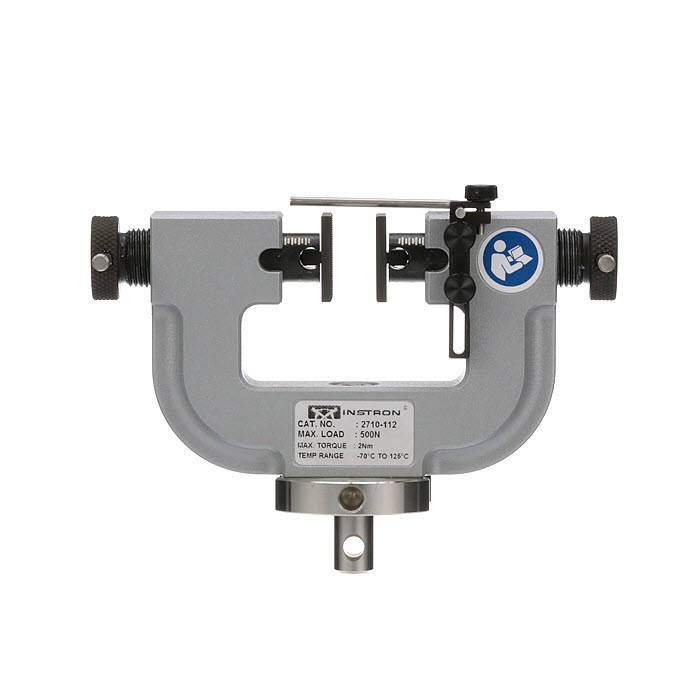 Because ASTM F88 involves very low forces, test results can be easily affected by small details. For example, customers who prop up the tail of the specimen by hand (T-Peel Technique B) or use some other device to support the tail will see different results from those who test without providing any sort of tail support. Likewise, it is important to make sure that load cell cables and pneumatic grip hoses are properly clipped to the crosshead before testing, as hanging cords produce drag forces that can adversely effect test results. Though attention to detail and consistency is always important, the extremely low forces involved in ASTM F88 testing means that operators must be especially careful to control all possible adverse forces that might influence their results.

Lastly, there will be variation between different brands of testing systems due to the different data acquisition systems used. This paper describes how Instron handles data rate and bandwidth, and how these settings effect peel test results.