Today, heart disease is so common that it’s a fair statement to make that you or someone you know has been affected by this illness. It’s estimated that more than 17 million people around the world lose their lives to heart disease every year, according to the World Health Organization. And in the US alone, more than 500,000 of those patients undergo bypass surgery. Most surgeons will “borrow” blood vessels from another part of the patient, such as the mammary artery or saphenous vein; another option is to use a prosthetic graft material. Tissue Engineering will soon provide the superior option, replacement parts made from the patient’s own cells.

While prosthetic and “borrowing” the patient’s veins are popular and familiar choices amongst bypass patients, there is risk involved. The prosthetic grafts have the chance of rejection by the body because they are not natural and are foreign to the body. Also, the plastic material has been shown to increasing clotting and/or become infected, resulting in additional hospitalization. Using existing veins/arteries is limiting as the supply is not endless, as many as 40% of bypass patients are unable to choose this option due to disease or previous use. 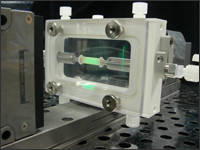 Tissue engineering – a process that makes replacement blood vessels, in vitro, a reality – allows for a long-term solution for bypass patients. A patient’s cells are grown on a 3D scaffold, which could be natural or a manufactured material, in an environment that is similar to the body. The resulting tissue is then implanted in the patient. With tissue engineered parts, you are not “borrowing” from other areas of your body reducing the concern about availability and because the concern for rejection is obsolete, because the patient’s body recognizes the cells as its own.

To be successful, tissue engineered implants must be both biologically and mechanically similar to native tissue. This means that the scaffold material and the end products are tested and characterized using tension, compression, and other forces to make sure that they can endure the physical strains of implantation. Research has also shown that growing tissues under these same mechanical forces (exercising the tissue) results in a tissue similar to native tissue.

In addition to heart disease treatment, tissue engineering has the ability to change modern medicine in many different areas. Pediatrics is a special case. Current mechanical medical devices are able to “cure” pediatric disease and defects; however because the patients are babies and their bodies are growing quickly, the surgery must be repeated many times to correct the size of the device. Tissue engineering offers a solution that can grow with the patient and minimize the number of invasive surgeries necessary.