During a recent customer visit, a concern was raised about a turnaround point on the graph that they had not previously seen. Following a bit of investigation, the customer was producing galvanized steel of various grades, some of which was aged. The graph below shows a magnified view of the fairly aggressive upper yield point (UYS or ReH), which results in an almost immediate drop in stress. 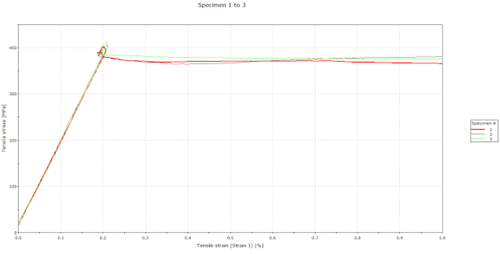 The customer had been testing galvanized steel for many years and had never seen negative strain at the yield point before. The new system, which was running Bluehill® 3 with an AutoX, showed backward strain during yield, which proved surprising to the customer as it was not present in historical data. The AutoX was able to more accurately plot the reduction in strain (9 µm of movement) at yield due to its increased accuracy over the previous system.

The negative strain after upper yield is based on the way metals yield within a parallel section of material. Stress concentrations form at the shoulders or at the jaw faces in parallel specimens and typically propagate through the material at 45° angles. As the initial yielding takes place outside of the gauge length, which causes the stress (load) to drop, the gauge length contracts and a reduction of strain is seen on the graph. The video shows how the dislocations travel through the material, in this case from the bottom to the top of the specimen (12—24 seconds).

The diagram below shows how the extensometer arms are unable to see all of this extension. 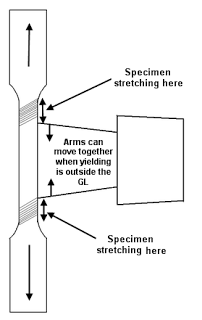