Preloading, and How It Affects Your Mechanical Test

It is almost always recommended that the Bluehill® Software preload feature be used when you’re performing a mechanical test. Preloading simply removes slack from the load string before a test begins. This is done by loading the specimen at a specified rate - called "preload speed" -  until a particular load limit is reached - called "preload". Note that this value should be high enough that it removes slack from your load string, but low enough that it doesn’t interfere with important early-test calculations like modulus or yield. Once the preload is reached, the software begins collecting data from the load cell, crosshead encoder, and any other measurement device you have in the system. That means your test begins collecting load data after it’s reached the preload value. It also means your first recorded load point will be the preload value and not zero—which is okay! There are also calculations, like slack correction, that allow you to remove what is called the “tow” section of the curve (Section B in the image below). 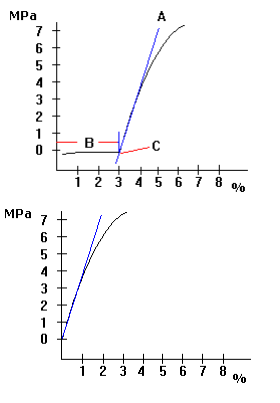 Once the preload is reached, Bluehill gives you the option to perform an auto-balance of your physical or virtual measurements. Any strain source, whether it is the crosshead extension or an extensometer, should be auto-balanced after the preload is reached. This ensures that all of the specimens in your sample start from the same load and strain point, making your data more accurate and much easier to process (especially if you are using extension and strain-based calculations).  If using extension as your strain source, keep in mind that your gauge length is now equal to the original gauge length plus the distance traveled to reach the preload. You should not auto-balance the load signal. We commonly see load being balanced incorrectly (see my post on balancing load cells). Once a specimen is gripped, it is common to see a bit of force on the load cell—either positive or negative. This is simply a function of how the grips hold the specimen, or it is due to the mass of the specimen. If the force recorded on the load cell is severe, it may be due to misaligned grips or a poorly-inserted specimen. If a specimen is brittle or fragile, a feature such as Specimen Protect can be used to ensure the load on the specimen does not exceed a specified amount (+/-) before beginning a test.

Effectively using the preloading and auto-balancing features of Bluehill can help keep your results much more consistent. If you have questions on how to incorporate these features into your tests, feel free to contact us.