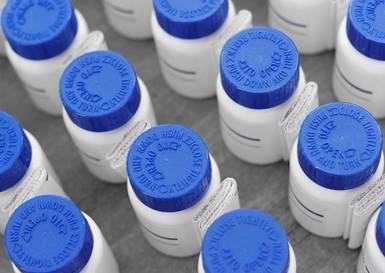 Child-resistant (C-R) packaging, such as child-proof medicine bottles, reduces the risk of children being poisoned due to the ingestion of adult medicines that could be potentially hazardous when consumed in large amounts. In the pharmaceutical industry, C-R packaging encompasses both prescription medicines and over-the-counter medicines. Some common medicines and consumer products that require C-R packaging include acetaminophen, aspirin, ibuprofen, and mouthwash. The challenge with C-R packaging is to ensure that the force and torque required to open the package is too high for a child to open, but not too high for an elderly person or someone suffering from a joint disorder, such as arthritis. 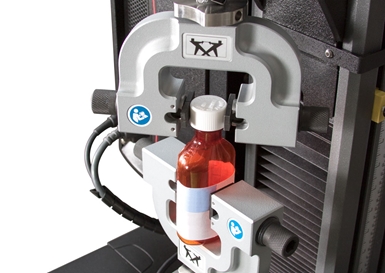 Despite the simplicity of the product, both axial force and torsion are required to effectively open and close a child-proof medicine bottle. While many bi-axial test systems are notoriously complex, our Torsion Add-On for the 6800 Series table top system is designed for simple bi-axial testing. Using standard screw side action grips to hold the body of a medicine bottle, and a four-jaw chuck to grasp the cap, it’s possible to push down and simultaneously twist a C-R medicine bottle. Using Bluehill® Universal software for the Torsion Add-On, it’s possible to both disassemble and reassemble a bottle within a single test. The flexibility of Bluehill Universal software enables users to closely simulate how a consumer would interface with opening and closing a C-R bottle.