How to Social Distance in the Lab

As the world adapts to the “new normal” forced upon us by COVID-19, companies must look to creative solutions to protect their employees. For many this means the implementation of new health screening protocols, reorganizing the workspace to increase social distancing, improving cleaning procedures, and more.

This guide will discuss various materials testing technology that can help optimize your facility's testing lab to improve social distancing and reduce the risks posed by shared spaces and surfaces.

Grips are one of the most high-contact surfaces on a universal testing machine. Manual grips are the most common gripping solution found in most testing labs, but are also a source of potential contamination since they require the test operator to tighten and loosen them by hand each time a specimen is inserted and then removed. For testing capacities up to 10 kN, Instron's 2712 Series pneumatic grips offer a safer alternative because they can be equipped with a footswitch which allows operators to open and close the grips with minimal hand contact.

For 3400 and 6800 Series systems, the Smart-Close Air Kit with a footswitch can be outfitted on all new and existing systems. For 3300, 5900, and 5500 Series, the Automatic Air Control Kit comes with a dual pedal footswitch.

The tightening mechanism of a manual grip, like the mechanical wedge action grip shown above, involves frequent contact when opening and closing the jaw faces.

The pneumatic grips footswitch operation allows the operator to open and close the grips with their foot, without the operator needing to touch the grip with their hands.

For even more hands-free optimization, the Smart-Close Air Kit for 3400 and 6800 Series systems allows the grip pressure to be pre-defined in Bluehill® Universal. The grip pressure is saved with the test method, eliminating the need to manually adjust a regulator when changing test methods for different materials or specimens.

Another high-contact surface on a universal testing machine is its computer. The latest Instron testing systems - and even older out-of-production systems that have been retrofitted - can be equipped with Bluehill Universal software and its touch-friendly Operator Dashboard.

If you're thinking touch-friendly devices might sound like something you’d want to avoid at this time, just think about how much quicker and easier it is to sanitize a touch screen after each use compared to a traditional mouse and keyboard. Furthermore, the Instron Operator Dashboard uses capacitive touchscreens that are compatible with latex and nitrile gloves – making it possible to perform all of your lab tasks in gloves if necessary.

The second significant benefit to Instron's Operator Dashboard is its ability to increase social distancing in the lab. The Operator Dashboard saves a significant amount of benchtop space over traditional PC setups by eliminating the need for a PC tower, monitor, mouse, and keyboard. The All-in-One (AiO) Operator Dashboard mounts directly onto your test frame using a t-slot mounting bracket, which allows you to adjust the height and angle of the Dashboard to better fit the operator. Mounting the Dashboard onto the frame saves, on average, as much as 55% of benchtop space when mounting it to a single column frame, up to 31% for dual column table models, and up to 16% on floor models. This allows you to create a healthier environment by allowing your operators to be spaced further apart.

Sharing equipment such as micrometers or calipers can present a significant source of cross-contamination in the lab. One solution to this problem is to set up a dedicated automatic specimen measurement device (ASMD) station at each of your Instron systems. Even better, ASMDs can be configured with a footswitch that allows operators to input all specimen measurements directly into the software with a foot tap instead of by hand. Check out this video to see how it works with Bluehill Universal.

The Torsion Add-On 3.0 is an accessory that can be added to any 5900 or 6800 table model (dual or single column) to allow for simultaneous (or non-simultaneous) axial and torsional testing. Conducting axial and torsional testing on the same frame can be beneficial, as it allows you to better simulate real-world applications of certain products while eliminating the extra steps that would be required if you were to run the tests on separate systems.

Normally, if you were to conduct these tests on separate testing systems, you would need a standard tensile test frame and a torsion test frame, which if spaced six feet apart, could account for as much as 13 feet of benchtop space.

In comparison, by equipping your 6800 Series Dual Column table model with the Torsion Add-On 3.0, you’d only be using 30 inches of benchtop space – a reduction of 528%!

The Automated XY Stage is another add-on for 5900 and 6800 Series table models (dual or single column) that can reduce benchtop space by increasing the functionality of a single system. This add-on is used for automating compression, flex, and tension tests on devices with multiple test points, or multiple components with repetitive test points. This level of automation allows one operator to run multiple systems simultaneously, reducing the number of operators needed in the lab to maintain testing throughput.

In comparison, if you equipped two single column systems with Automated XY Stages and spaced them six feet apart, they would only take up approximately nine feet of benchtop space – a reduction of 45% with the added benefit of fewer operators in the lab. 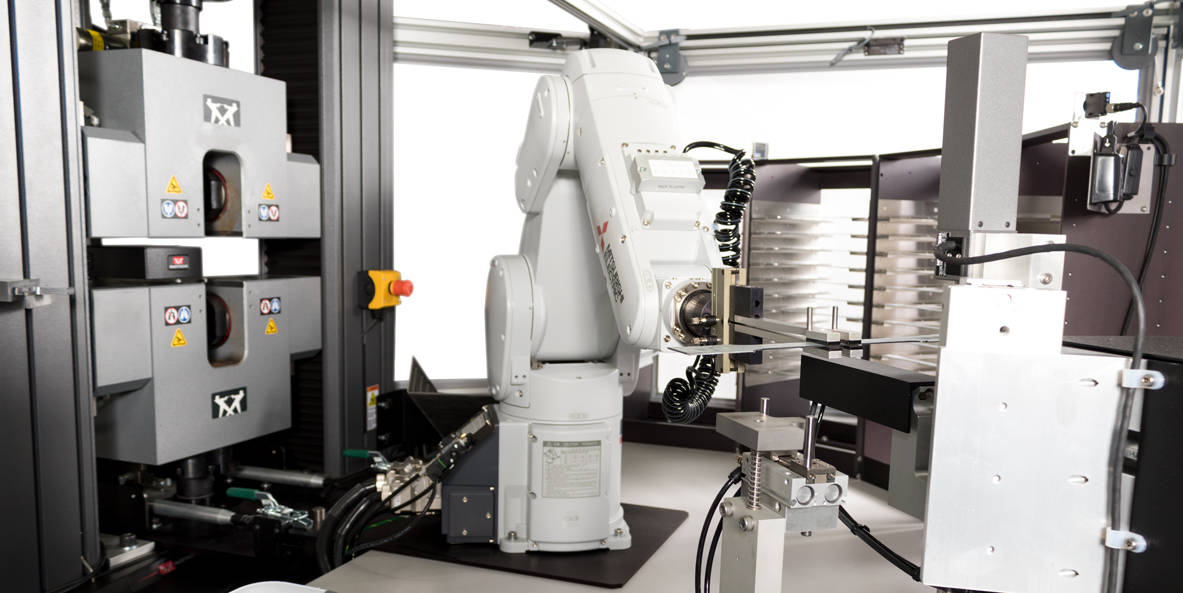 All of the following steps in the testing process can be performed by a robot:

Automation consists of a wide spectrum of features that do not all need to be adopted together. Some labs might only automate a few of these steps while still relying primarily on human operators, while other labs may rely on a robotic system to automate almost everything.

The more you’re able to automate, the less your operator actually needs to be around the testing system. For example, Instron's AT6 robotic test frame can be set up so that all the operator needs to do is reload new specimens into the specimen racks while the system takes care of the rest of the testing process. The operator can then leave the lab to focus on more value added tasks or even leave the office to work from home.