With locations in Aalborg and Brande, the new Siemens testing center is a global leader due to its footprint comprising over 27,000 square meters and its advanced testing abilities. The facility is part of a one billion krone investment in Denmark’s wind turbine industry.

Watch the inauguration, including footage of Prime Minister Thorning-Schmidt learning about a 5900 Series system (hosted by TV MidtVest). 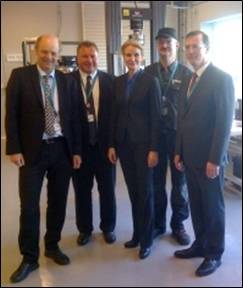