The Next Generation Materials Testing Software


Bluehill Universal is built from the ground-up for touch interaction. The new portrait layout, with its meticulously crafted visual design, gives the most comprehensive view of the test workspace on the Operator Dashboard, a stunning large-format touch monitor with an integrated controller. Intuitive workflows make it easy to train new or experienced users, simplify operator training, and allow you to start testing even faster than ever before.


HAVE AN OLDER SOFTWARE VERSION?
Learn About Upgrading - Pick Your Current Software Version 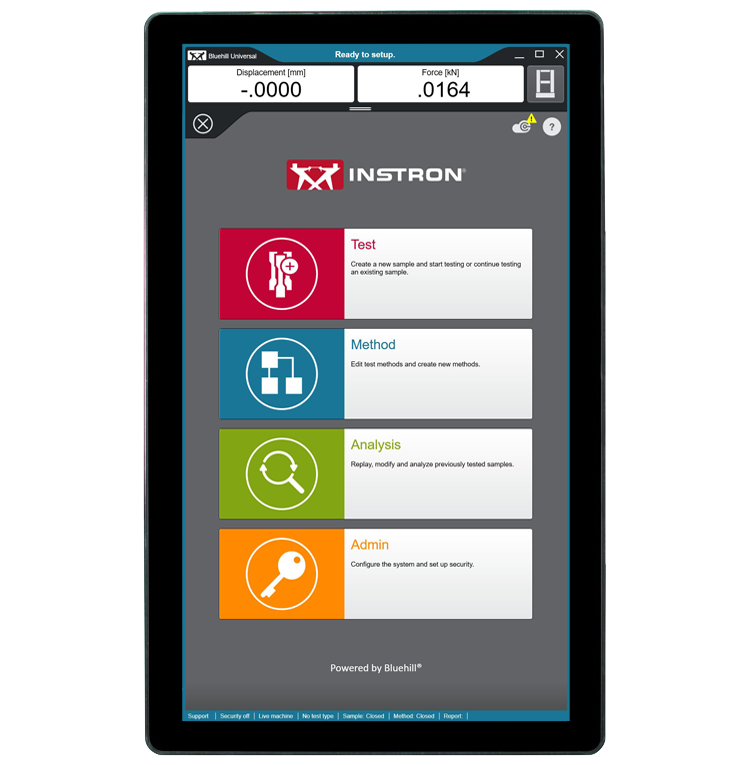 Designed with ergonomics in mind, the Operator Dashboard is a large format All-in-One computer and touch screen that can be either mounted to the side of a user’s Instron system or used with a pedestal base mount.

For when you need results fast, QuickTest allows users to enter a few simple parameters and run their test within seconds.

Bluehill Universal includes an extensive library of pre-configured methods for some of the most commonly used ASTM, ISO, and EN standards.

Users can be guided through the entire testing process with step-by-step instructions, ensuring that tests remain repeatable, simple, and error-free.

Connect micrometers and calipers directly into the system to effortlessly import specimen dimensions for stress measurements.

Allows users to add a test component to the workspace to quickly visualize if a test passed or failed based on the acceptance criteria set in the test method.

Users can seamlessly enter information into Bluehill Universal with any USB barcode scanner. Simply create a barcode, inclusive of the tab function, and information can be added in any text or number input fields.

SMARTER
Advanced Capability without the Complexity

Simplicity doesn’t mean that you have to give up advanced features. Bluehill Universal’s modular features give you the power and flexibility to run the most complex of tests. 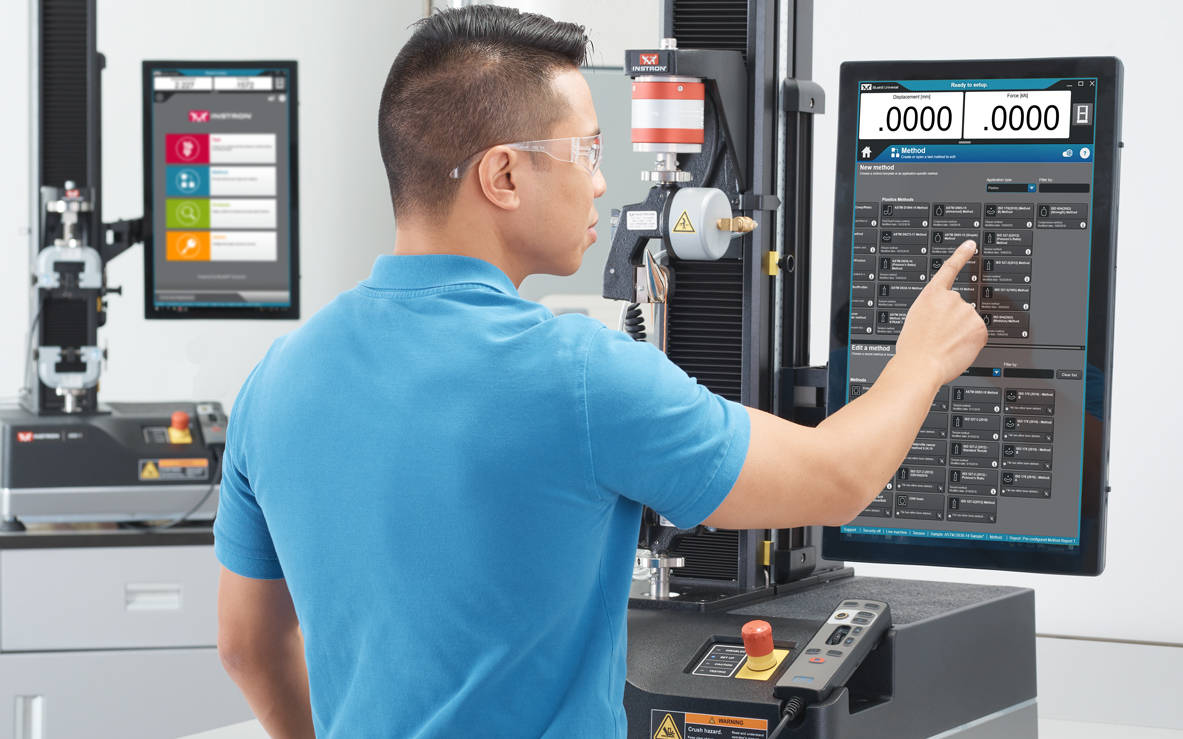 Export anything post-test, from a professional report with graphs and tables, to customized text files to integrate with your Lab Information Management System.

Build simple cyclic tests that include ramps, holds, and triangle waves. Conditional logic allows you to create looping patterns that help you re-create real-life scenarios with your tests.

Build your own custom functions using a list of variables, measurements, and raw data. For example, users can set test speed as a function of specimen width and thickness or create a custom raw data expression such as subtracting out drag force when testing in a fluid bath. 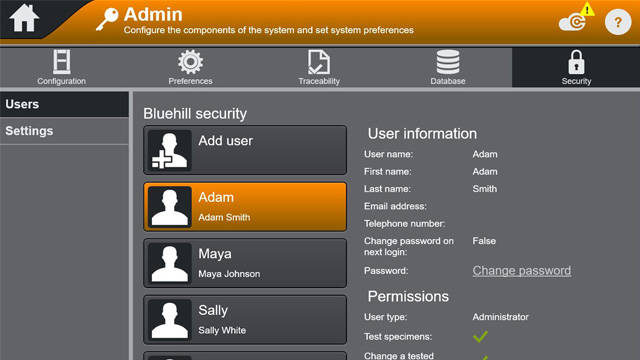 Replay, reanalyze, or make modifications to previously-tested specimens without having to re-run tests.

Connect a USB webcam to experience point-by-point video playback, allowing you to view the test even after it has finished.

Using subsample, users have the ability to sort results by all parameters including operator name, specimen break location, and specific specimen properties. 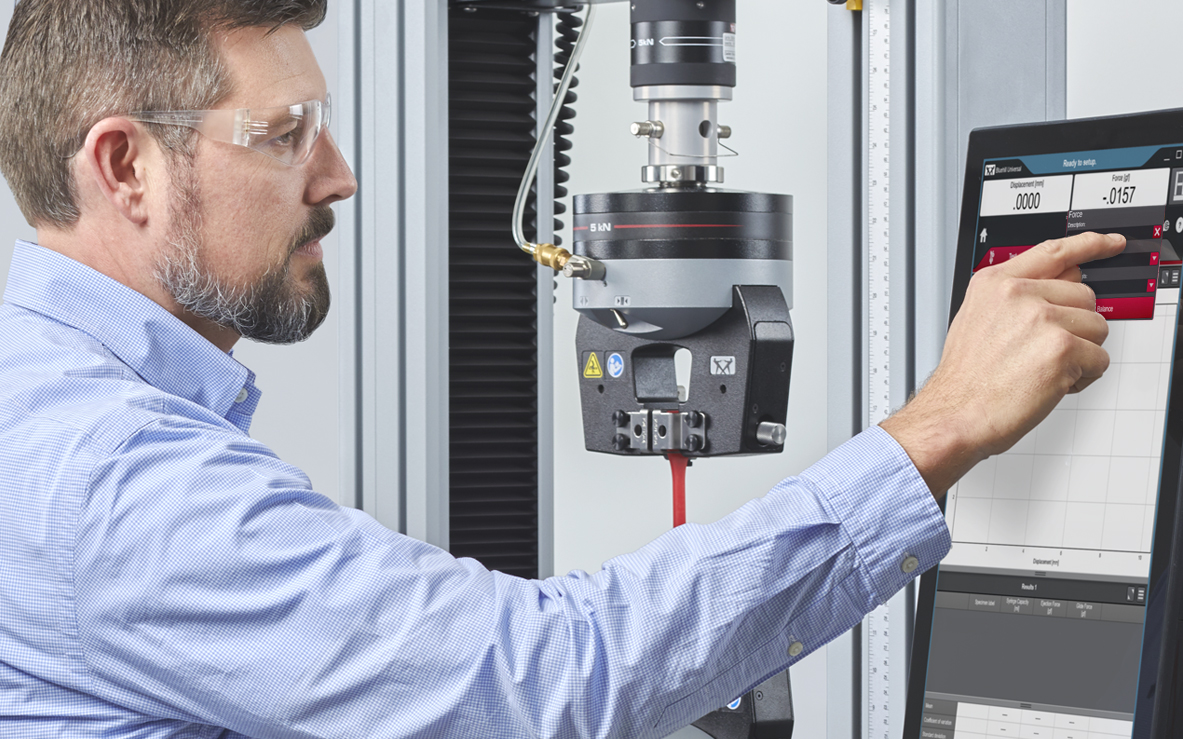 Bluehill Universal’s Application Programming Interface (API) allows system administrators to program their own custom interfaces for controlling pre- and post-test actions within Bluehill. In many cases, the API can allow you to automate some components of the testing sequence, as well as create your own interface for running certain parts of the system, like importing, starting, or exporting.

Some users prefer to build methods or perform post-test data analysis at their own desks or remotely on their laptops, rather than at the test instrument. The Off-line Programming and Data Analysis option is available in either a single or unlimited license.

The Next Generation of Remote Technical Support

Instron Remote Technical Support (RTS), powered by Instron Connect is built into Bluehill Universal leverages the Internet of Things (IoT) to bring customers even faster, more streamlined technical support. Instron strives to be the leader in customer satisfaction and Instron Connect helps bring our support engineers even closer to your organization.

Bluehill Universal is available with an Operator Dashboard on new 6800 and 3400 systems. It can also be added to existing 6800, 3400, 5900, 3300, 5500, 59R, and IS02 static testing systems, in addition to systems upgraded to 5900 electronics. ElectroPuls™ and 8800 dynamic systems can also take advantage of Bluehill Universal’s versatility and ease-of-use when running static tests.