“The ElectroPuls is able to give you a complete indentation all the way through, providing lots of information, at a very precise scale. .”

Mechanical testing tissue microstructure is becoming an increasingly active area of research, especially in oncology. It has been shown that changes in this microenvironment are key in cancerous growth, namely an increased tissue stiffness. External mechanical forces can directly influence cell signaling regulating and influencing growth. Investigating the mechanical properties of the microenvironment is, therefore, key to creating a biomechanical model of tumor growth.

Tumour cell samples are available in collagen scaffolds which are 150μm thick. Mechanical testing of such thin samples is a difficult problem. High sampling micro-indentation using the ElectroPuls™ E3000 was able to extract mechanical properties of these very small samples.

Indentation testing is becoming an increasing field for mechanical characterization of thin film tissues due to its ability to view response over a range of forces, shows a bulk modulus value and localized testing can be obtained.

The Instron ElectroPuls E3000 was fitted with a 5N load cell.  150μm thick collagen gels were placed into a fluid-filled petri dish container. Initially, a simple waveform was created with a 0.05μms-1 indentation rate.

Since it was difficult to accurately place the indenter a few μm above the surface of the gel it meant that tests ran for a very long time. A more complex waveform was created that would indent the gel up to 0.5N then raise the indenter 150μm to just above the gel surface. This reduced the indentation times by a factor of 4 while still maintaining 0.05μm indentation rates.

This ultra-slow indentation allowed for precise mapping of the force-indentation profile of the thin gel from which stiffness can be estimated.

The results were processed using a low pass filter to further reduce noise as well as a downsample filter to reduce the file size. An algorithm was used that uses linear modeling analysis to find the start point of the test as well as the point where the plastic beneath became heavily involved

From the load – depth profile the modulus of the collagen gels was taken using the modeling formula:

Where F is the load applied, E is the elastic modulus, R is the radius of the indenter, δ is the indentation depth and ν is Poisson’s ratio of the material.

Testing thin film tissue samples with the ElectroPuls™ E3000 on the same system that has been used for dynamic 3KN fatigue tests upon demonstrates the flexibility of the instrumentation to the user and the limits of what the machine can do are pushed by the ingenuity of the user. Instron® offers a whole range of load cells that can suit a whole range of different applications. 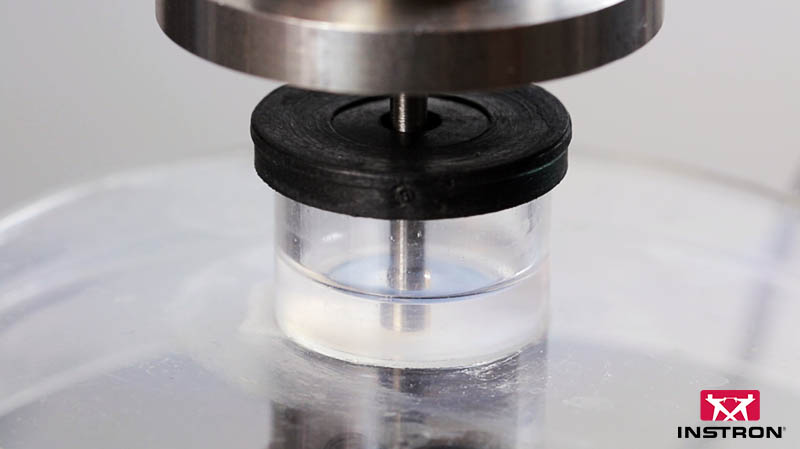 Since the postprocessing aims to give the user the raw data it means that the end user can process that data in whatever way they see fit and there are no integral system biases.

The ability of the calculations module to enhance and vastly improve the capabilities of the machine were demonstrated by the noise reduction technique employed. A simple noise reduction algorithm that takes the mean average of all the data entering the machine and records it is able to show how the system can be tuned to whatever test you want using the calculation module. 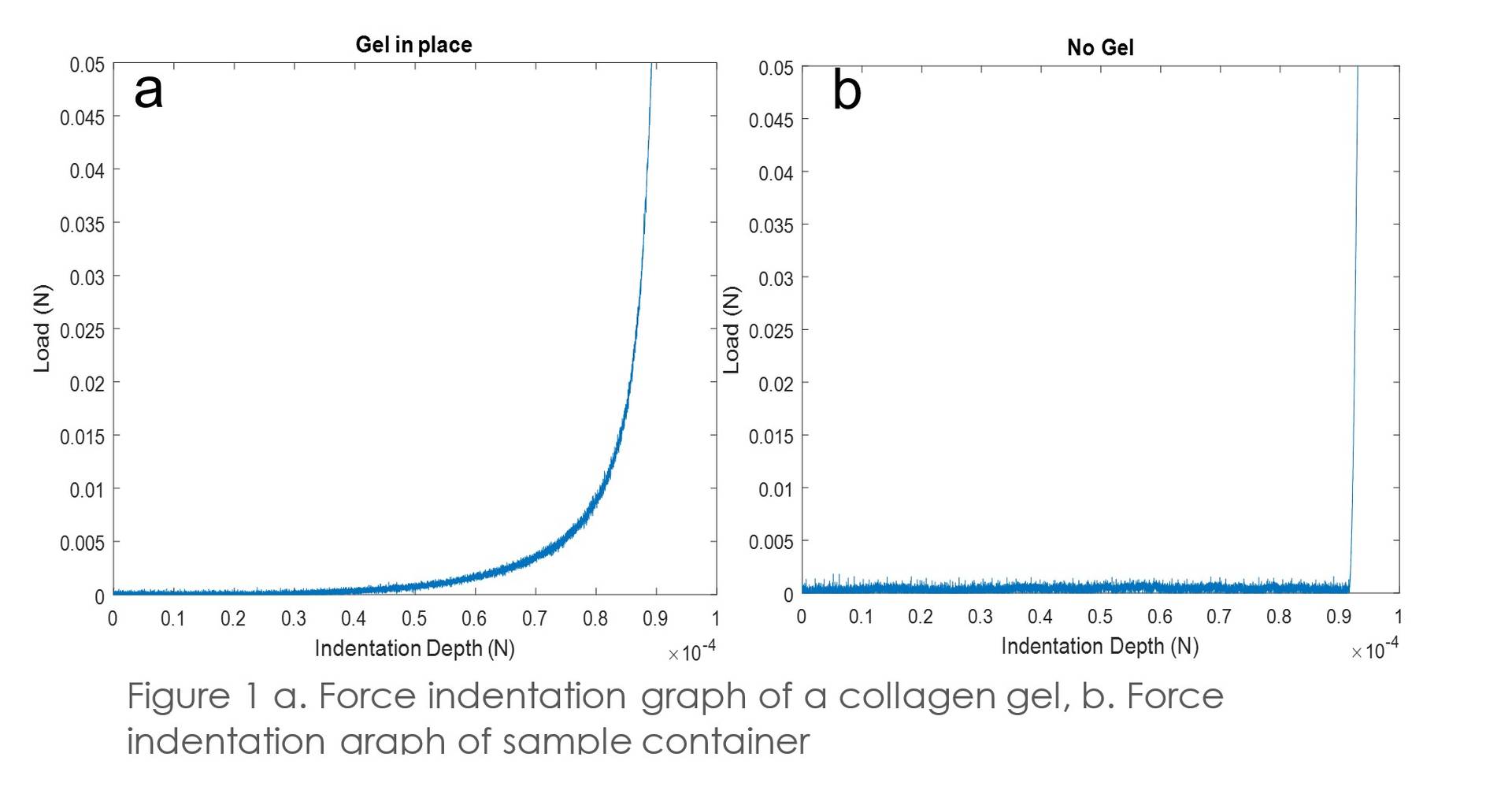 This has allowed information from 10kHz of data to be used while only recording the data at 10Hz such that the file sizes are manageable but the noise levels are very low. Thus this meant that we were able to reduce levels of noise by significant margins simply by adding a small calculation. Results

The two graphs is a simple but powerful graph showing that a 50N load cell is capable of providing mechanical information from soft tissue 150μm thick collagen gel.

Final results are able to show that the modulus of collagen in this form is in the range 1800Pa – 2500 Pa (figure 2). These results not only are able to be incorporated into models of growth but they also demonstrate that it is possible to get results from these gels. This means that the further research will be able to characterize collagen embedded cancer cells to get a better model of cancer growth.

These results were validated using an atomic force microscope which is normally used for modulus values of much smaller samples. The results from the AFM concurred with those from the Electropuls™ suggesting that in this kind of testing the Electropuls™ has the capability and sensitivity to test thin biological tissues.