How to Perform a Tensile Test on Metals to ISO 6892

ISO 6892-1 is one of the most commonly adopted testing standards for the tensile testing of metallic materials at ambient temperature. The most recent version of this standard was released in 2016 and describes three different test methods: Method A1, Method A2, and Method B. ISO 6892-1 is similar but not equivalent to ASTM E8/E8M. This guide is designed to introduce you to the basic elements of an ISO 6892-1 tensile test and will provide an overview of the materials testing equipment, software, and tensile specimens needed. However, anyone planning to conduct testing should not consider this guide an adequate substitute for reading the full standard.

Evolution of the Standard

ISO 6892-1:2016 is the current version of a metals testing standard that has undergone several iterations. Instron actively participates on the committee, which allows us to ensure that our products are compliant with the standard and that our team is educated about upcoming changes. The prior version, ISO 6892-1:2009, was itself a replacement of both the former ISO 6892 standard and also the popular EN10002-1:2001 standard.

One of the greatest evolutions of ISO 6892-1 has been largely related to test control methods, which can pose a significant challenge in metals tensile testing. This evolution was mainly lead by the work conducted as part of the TENSTAND project, where it was identified that the test rates between different machines testing to the same standard will yield different results due to materials' strain rate sensitivity. The 2009 version introduced testing rates based on strain rate (Method A), which became the preferred method. The traditional test method inherited from EN10002:2001 was based on maintaining a stress rate during the elastic region, which was needed for manually-operated machines. This original method was also retained, and became 'Method B' in the 2009 version of the standard.

The introduction of Method A caused confusion, as many users thought Method A was only achievable by using equipment capable of closed-loop strain control, where instead it could also be accomplished by using a consistent crosshead speed. To clarify this situation, ISO 6892-1 was revised again into the current version, ISO 6892-1:2016. The 2016 version includes three test methods, A1, A2, and B, where the former Method A is split into two different clearly-defined test methods, Method A1 (closed-loop strain control) and Method A2 (consistent crosshead speed) while Method B continues to be based on maintaining a stress rate during the elastic region. A note was added to Method B to clarify the range of the test where a stress control must be maintained. The video below discusses Method A1 in greater detail.

Tensile Strength - The maximum force or stress that a material is capable of sustaining during a tensile test. 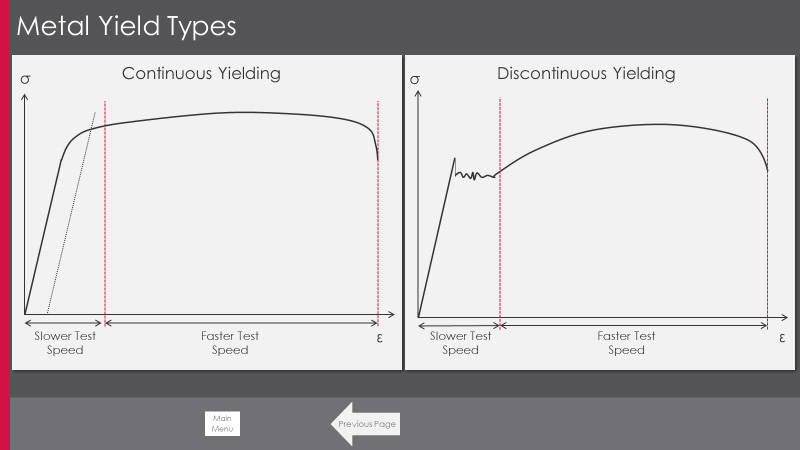 ISO 6892-1 accommodates a wide variety of specimen types due to the huge range of applications that metallic materials are used for. Primary specimen types include sheets, plates, wires, bars, and tubes. Full details on specimen preparation and measuring can be found in the annexes:

Annex B: Types of test pieces to be used for thin products: sheets, strips, and flats between 0, 1, and 3 mm thick.

Annex C: Types of test pieces to be used for wire, bars, and sections with a diameter or thickness of less than 4 mm.

Because ISO 6892-1 testing is conducted on a wide variety of metals, system force requirements can differ greatly. The force measuring system of the testing machine must be in accordance with ISO 7500-1, class 1, or better. The Instron® 5900 Series offers test frames suitable for testing sheet metal (10kN) all the way up to steel plate (600kN). The 5900 Series provides a superior load frame including pre-loaded bearings, precision ball screws, an extremely stiff crosshead and base beam, and low-stretch drive belts. These features contribute to an overall advanced performance, producing highly accurate results. The features also help to minimize the energy stored during a test, which is especially evident when testing high-strength metallic materials to ISO 6892-1. 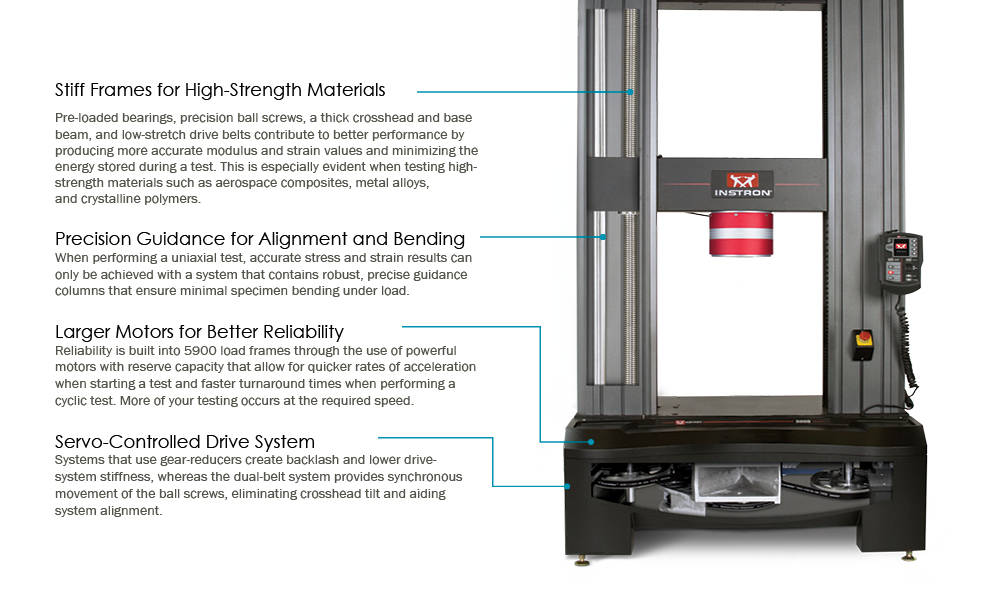 There are many different gripping technologies suitable for ISO 6892-1 testing (wedge, hydraulic, pneumatic, etc.) they can all be classified as either proportional or non-proportional according to the way in which they exert clamping force on the specimen.

With non-proportional grips, the clamping force on the specimen remains consistent and is independent of the tensile load being applied. This is typical of side-acting grips and fatigue-rated hydraulic wedge grips where the clamping force is generated by a power source that is not directly associated with the tension loading of the specimen. This source is typically a high pressure (210 bar/3000 psi or higher) hydraulic supply. One benefit of non-proportional grips is that the clamping force is typically more adjustable, which offers more potential application advantages. For example, when testing non-machined specimens, fine adjustments can help users achieve optimal gripping pressure while minimizing stress concentrations that could cause premature failure.

There are three different types of extensometers that are typically used for ISO 6892-1 testing: clip-on devices, non-contacting devices, and automatic contacting extensometers. Depending on the calculations needed, extensometers must be in accordance with ISO 9513 class 1 or 2. Clip-on extensometers such as the 2630 Series are the most common type used. These devices can provide incredibly accurate and stable strain data and are typically cheaper to purchase than other types. They need to be robust enough to survive high-throughput testing labs and absorb any shock from the breaking of high-capacity metallic specimens if not removed during the test.

Automatic contacting devices such as the AutoX750 offer the benefit of repeatable clamping forces and placement, which can reduce variances between different operators placing clip-on extensometers manually. Automatic contacting devices can also adapt to multiple gauge lengths, which can be cost effective for users who need to test a variety of specimen types. The AutoX is designed to be robust enough to remain on throughout the test through failure. However, when combined with Bluehill® Universal software, the AutoX750 can be set up to remove itself automatically just before specimen failure in order to prevent any excessive wear to the knife edges.

Non-contacting devices such as the AVE 2 Automatic Video Extensometer offer the benefit of removing any influence incurred by the extensometer making physical contact with the specimen. For instance, if a test specimen is very thin, such as with packaging metals, the weight of a clip-on device can alter the results considerably. The knife edges used to affix the device to a fragile specimen can also damage the specimen and cause premature failure. Furthermore, because the AVE does not contact the material, there is no potential for the extensometer to be damaged or worn when testing high-capacity materials.

Thousands of customers around the globe rely on Bluehill Universal® to test their material to ISO 6892-1. All calculations required in ISO 6892-1 testing are already pre-configured into Bluehill Universal, but for those who prefer to start from scratch and build their own method, the interface makes it easy for users to manually input their own calculations. The metals methods package also provides pre-built methods to all of the following standards: ASTM E8 / E8M, ASTM A370, ASTM 615, ASTM E646, ASTM E517, EN10002, ISO10113 & ISO10275.

Most labs testing to ISO 6892-1 need to test a high volume of specimens on a regular basis. For this reason, anything that can be done to increase throughput is advantageous. Fortunately, there are many options for increasing a lab's testing throughput. Small software modifications can reduce repetitive tasks, and some grips and extensometers can reduce setup time and increase repeatability, which will reduce the need to run retests. Finally, there is the option to fully automate the entire testing process, which allows testing to run for several hours without the need for any operator interaction.

This whitepaper provides a detailed description of how ISO 6892-1:2016 updates the previous version of the standard, ISO 6892-1:2009. In particular, it describes how 'Method A' in the 2009 version has now been split into two separate test methods, A1 and A2.

This whitepaper provides an in-depth description of how the new standard replaces both the previous version of ISO 6892 and the widely-used EN 10002-1:2001 standard. It is highly relevant reading for anyone performing tensile tests on metallic materials.Instron testing machines are able to meet the demandingrequirements of ISO 6892-1:2009, both Method A, basedon strain rate control, and Method B, based on stress rate.

News item regarding the most recent update to the standard.

Interview by AZO Materials with metals testing expert Matthew Spiret regarding the introduction of ISO 6892-1:2016 and how Instron test systems are able to comply with the new test methods outlined in the standard.

Webinar that explains the history of ISO 6892-1 and discusses the new test methods A1 and A2 in detail.

The AutoX 750 is a high-resolution, long-travel automatic contacting extensometer. It can be mounted onto any electromechanical 3300, 5500, or 5900 table top and floor model systems, as well as LX, DX, HDX, and KN static hydraulic testing systems. It is well suited for applications involving plastics, metals, biomedical, composites, elastomers, and more. The AutoX has a maximum travel of 750 mm and accuracy of ± 1 µm.

5900 Universal Testing Systems are engineered for precision, built for durability, and offer the flexibility for changing requirements. They are designed with standard and optional features that increase testing efficiency and improve the testing experience for the operator. A wide range of models are available for testing capacities from < 100N up to 600kN.

Bluehill Universal Software is built from the ground-up for touch interaction and an intuitive user experience. Discover simpler and smarter testing with features such as pre-loaded test methods, QuickTest in seconds, enhanced data exporting: and Instron Connect – a new feature that provides a direct communication link to Service.Users of previous versions of software such as Bluehill 2 and Bluehill 3 can easily upgrade to the newest version of Bluehill.